Your dog’s bones and joints withstand a lot of wear and tear, especially if they are an energetic Labrador retriever or rambunctious German shepherd. In addition, some dog breeds are genetically predisposed to orthopedic problems and more likely to be affected. If your dog develops a sudden lameness or seems painful, a thorough exam and X-rays may help our Best Friends Veterinary Care team diagnose one of the following common conditions.

Each of a dog’s hip joints are composed of a “ball” (i.e., femoral head) that fits into a deep “socket” (i.e., acetabulum) on their pelvis. Hip dysplasia develops when a dog’s bones grow too quickly, and the surrounding muscles and ligaments cannot adequately support the heavy joint. Their body tries to remodel the bones to compensate for and stabilize the joint, which leads to a flattened femoral head and a shallow acetabulum that no longer fit together smoothly. In severe cases, the acetabulum may become too shallow to accommodate the femoral head, and the joint may become permanently dislocated.

Hip dysplasia can affect any dog breed, but is most common in large-breed dogs, such as Labs, golden retrievers, German shepherds, and rottweilers. Affected dogs develop joint pain and lameness that is often progressive. Anti-inflammatory and pain medications may adequately manage mild cases, but severe cases often require total hip replacement to maintain a good quality of life.

A dog’s patella (i.e., kneecap) normally glides up and down in a depression called the femoral groove, and is stabilized by several tendons and muscles. Patellar luxation occurs when the patella moves out of the femoral groove, and is displaced laterally or medially. Common causes include an abnormally shallow femoral groove, misalignment of the stabilizing soft tissue structures, or both. Patellar luxation is graded based on severity, with grade one disease involving a patella that can be manually displaced but will return to normal position spontaneously, and grade four disease involving permanent displacement, where the patella cannot be manually replaced in its normal position.

Patellar luxation is most common in small-breed dogs, such as Chihuahuas, miniature poodles, and Pomeranians, and often affects both knees. Affected dogs experience varying degrees of lameness, depending on severity. Dogs with mild patellar luxation often hold up the affected leg while running, when the patella moves out of its normal position, and then return to normal when the patella moves back into the femoral groove. Patellar luxation typically requires surgical correction to deepen the femoral groove and possibly realign surrounding muscles and tendons.

The cranial cruciate ligament (CCL) is part of an X-shaped ligament apparatus that stabilizes a dog’s knee joint. CCL disease typically involves chronic degeneration of the ligament, which can partially or completely tear when the knee is subjected to an abnormal force, such as a dog twisting their knee while running, or “landing wrong” when catching a ball.

CCL disease is most common in large-breed dogs. Affected dogs may have chronic lameness from ligament deterioration, but often show no signs until the ligament tears and causes sudden, severe lameness. Treatment involves surgery to reposition the proximal tibia so that the knee joint no longer requires the ligament for stabilization. 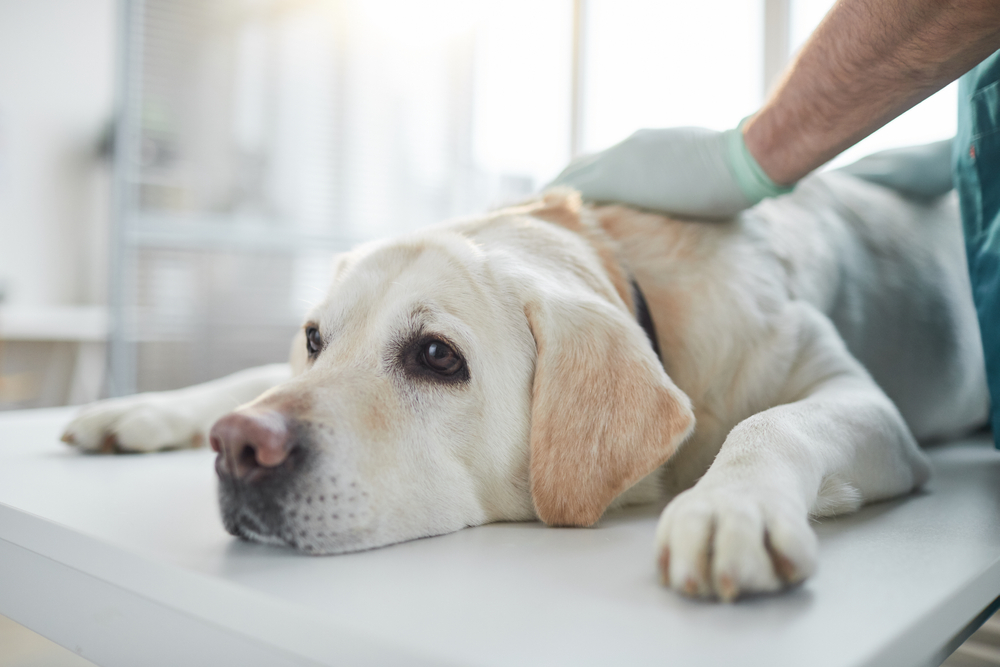 Osteoarthritis (OA), or degenerative joint disease (DJD), typically occurs secondary to another joint disease that leads to cartilage deterioration, such as hip or elbow dysplasia. Once joint integrity is disrupted, the bone surfaces no longer move against one another smoothly. The cartilage lining the joint begins to wear down and progressively degenerates, causing inflammation and pain that lead to lameness.

A number of treatments can help dogs with OA, including:

Unfortunately, many dogs with OA go untreated because pet owners assume that aches and pains are normal aging changes. No amount of pain is acceptable in pets, and any dog who limps should be evaluated. Dogs with mild OA can usually be managed with a combination of therapies, but more intensive therapy is often required to maintain a good quality of life in dogs with moderate to severe OA. Surgical joint replacement, in which the diseased joint is replaced with a new, pain-free joint that moves smoothly, is the gold standard treatment.

If your dog—or cat—is limping or seems painful, our Best Friends Veterinary Care team will diagnose the problem, and devise a treatment plan to get them back on their paws again. Contact us to schedule a lameness evaluation.